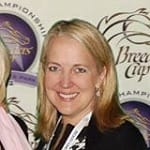 Mandy Minger, Vice President of Marketing, has been with Daily Racing Form since 1992. Minger began her career in thoroughbred racing as a groom at Philadelphia Park and in the publicity department at the Atlantic City Race Course. In 1991, she joined The Racing Times and, following the publication's closing, moved to Daily Racing Form as marketing coordinator in 1992. She held various marketing positions before assuming her current position in 2000. Minger is President of the Turf Publicists of America, a member of the Eclipse Awards Steering Committee and is active in thoroughbred retirement causes. She has been a guest speaker at the University of Arizona's Race Track Industry Program and has been profiled in Horseplayer Magazine's "Women in Racing" series. She manages the title sponsorship of the Daily Racing Form/NTRA National Handicapping Championship and actively contributes to the national marketing efforts of thoroughbred racing. Minger earned a B.A. in Literature from Richard Stockton State College in Pomona, N.J., where she was sports editor of her college newspaper. She travels annually to San Pedro Sula, Honduras where she does mission work at Our Little Roses orphanage. Minger resides outside of Philadelphia, PA with her husband and two daughters. Old Friends Equine awarded the Bobby Frankel Award to the staff of the Daily Racing Form on June 5, 2013 in recognition of the publication’s 90-page glossy tribute to the famous racehorses (with 2002 Belmont Stakes winner Sarava is on its cover), who now reside at the famous Kentucky retirement facility. Michael Blowen, president and co-founder of Old Friends Equine, and previous guest on this show, presented eight staff members of the racing industry publication with the award during a fundraising gala at Oheka Castle in New York. The award, named for the late New York-based Thoroughbred trainer Bobby Frankel is presented to people and organizations who best exemplify the Old Friends mission to help ex-racehorses at the end of their racing days