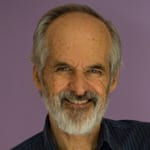 
James is a born ham who aspired to be a big cheese. A creative guy who played jazz trumpet professionally with Big Band groups and who loves to sing and compose music, he got sidetracked into the legal field in order to live the life he thought he should. In the early 70s, he broke loose and got involved in the New Age movement, studying the esoteric and living at the groundbreaking New Age community, Findhorn, in Scotland. Returning to the US 3 years later, he also became deeply involved in the field of hypnotherapy, not only as a practitioner, but as a teacher and founder of the Transpersonal Hypnotherapy Institute. He underplayed those aspects of him again by returning to the practice of law, but in the past few years, he has broken free for good. He gets to be a ham as co-host of Inner Revolutionary Radio. He's now actively reinvigorating his musical career, blowing his horn, singing and composing. And he partners with his wife Beth Green in teaching and consulting activities.