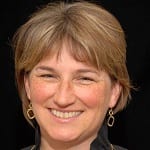 Karen Bulich Moreau is the President, CEO and co-founder of the Foundation for Land and Liberty. Karen grew up on a mushroom farm on the Hudson River in Catskill, New York, the granddaughter of a Croatian immigrant who shoveled coal to fire the cement kilns by night and farmed by day on rented cement company land. In 1943 John and Johanna Bulich purchased a farm on the river, and began clearing the land with their family and growing mushrooms in one of the large barns. Today, Bulich Mushroom Company is the last commercial mushroom farm in NYS in a valley where there were over 40 mushroom growers and once thriving cement plants. The three main employers of hundreds during Karen’s childhood, the Catskill cement plants, are mothballed or decaying relics of a once prosperous area. Karen credits her late father, Frank Bulich, with her understanding that wisely using one’s land resources in harmony with nature is a key to success, as well as maintaining a deep appreciation for the people who “work with their hands”. Mushroom farming was year round laborious work, and the girls in the family worked side by side with the men to do everything that needed to be done on the farm. Happy times, Karen recalled, revolved around the hunting seasons when the men in the family took some well earned time off to pursue ducks, deer and turkey. Karen went on to graduate from Siena College in 1982 with the top GPA in American Studies, also having founded the Siena Women’s Soccer Club and holding several school records in softball and first place in Model United Nations competition, defeating Harvard and Yale. She graduated from Albany Law School in 1985, shortly before the birth of her second child. Following law school, Karen worked in a general practice law firm, focusing on corporate, estate planning and real estate law, and taught Business Law at the Sage Colleges. She then worked solo as a country lawyer for many years, as she raised her five children. In 1993, she founded a farm market to retail her family’s farm products and teach her children the values one gains in a family business. She left the business in 2001 for an opportunity to shape government policy as an Assistant Counsel to the Senate Republican Majority. For eight years her practical expertise in agriculture and small business was instrumental in her role in crafting state agricultural policy. Additionally, she handled the subject areas of real property taxation, general business law, real estate, parks, tourism, and rural economic development for the Senate. Her first serious encounter with governmental land use regulation came with the Hudson River Valley Greenway proposal. As a young attorney, Karen worked with other interested landowners in the Greenway towns to ensure that the power of eminent domain was removed from the legislation which created the Greenway. Throughout her career, she has been involved in numerous local zoning issues, and has helped to organize citizen’s groups to address zoning changes. As she learned early on, one can work years to achieve the American dream of property ownership, only to have it wiped out with the stroke of a legislator’s pen or a Town Board vote of 3 to 2 on a confiscatory zoning proposal. Prior to heading the Foundation, Karen served as General Counsel and spokesperson for a privately-owned industrial marine terminal on the Hudson River, and maintains a private practice in real estate, land use law and estate planning. She manages the agricultural and woodlands on her own 130 acre farm, and enjoys restoring her historic home and barns. She is a member of the Boards of Directors of the Brighter Choice Charter School for Girls and Boys.