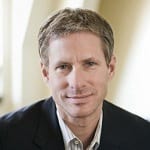 Chris Larsen is CEO and Co-founder of Ripple Labs, the organization that first built the Ripple protocol. Ripple is an open source decentralized payment network and virtual currency. More information can be found at www.ripple.com. Mr. Larsen is also a co-founder and former CEO of Prosper, a peer-to-peer lending marketplace, which he ran for eight years and a co-founder and former CEO of E-Loan, a publicly traded online lender, which he also ran for eight years. During his tenure at E-Loan, he pioneered the open access to credit scores movement by making E-Loan the first company to show consumers their FICO scores. Mr. Larsen also played a pivotal role in the passage of the strongest consumer financial privacy law in the nation and was hailed by Congresswoman Jackie Speier as being, "critical to the success of the bill." Mr. Larsen serves at the Board and Advisory levels at numerous companies and organizations including: Progreso Financiero, Betable, CreditKarma, and Electronic Privacy Information Center (EPIC). Mr. Larsen holds an M.B.A. degree from Stanford University and a B.S. degree from San Francisco State University, where he was named the 2004 Alumnus of the Year.