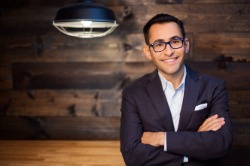 Dan Schawbel is a New York Times bestselling author, partner, and research director at Future Workplace, and the founder of both Millennial Branding and WorkplaceTrends.com. He is the bestselling author of two career books: Promote Yourself and Me 2.0. His most recent book is Back to Human: How Great Leaders Create Connection in the Age of Isolation. Through his companies, he's conducted dozens of research studies and worked with major brands including American Express, GE, Microsoft, Virgin, IBM, Coca-Cola, and Oracle. Dan has written countless articles for Forbes, Fortune, TIME, The Economist, and The Harvard Business Review. Considered "one of today's more dynamic young entrepreneurs" by Inc. Magazine, Schawbel has been profiled or quoted in more than 2,000 media outlets, such as NBC's The Today Show, Fox News's Fox & Friends, MSNBC's Your Business, The Steve Harvey Show, The Wall Street Journal, People Magazine, Wired Magazine, GQ, The Economist, and NPR.