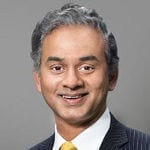 
Based in New York, Tiger is credited as one of the industry leaders who pioneered a new global business model and transformed a division of GE (formerly GE Capital International Services) into Genpact, a leading business process management and technology services company with $2.1 billion in annual revenues in 2013. With more than 66,000 employees across 25 countries, Genpact designs, transforms, and runs intelligent business operations including those that are complex and specific to a set of chosen industries. Tiger frequently writes and speaks about global talent issues, continuous skill development, and the importance of building a strong corporate culture. Tiger joined GE Capital in 1994 as head of Risk in India. After several different positions, he was promoted to the position of chief operating officer of Genpact in 2009, and was named president and CEO in June 2011.