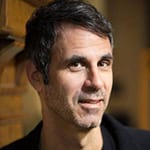 A son of two politically-active psychiatrists and a former sports reporter and play-by-play man, Steve Almond spent seven years as a journalist before writing his first book, the short story collection My Life in Heavy Metal. His nonfiction book, Candyfreak, was a New York Times bestseller. His short fiction was included in The Best American Short Stories and Pushcart Prize anthologies, and he writes commentary and journalism regularly for The New York Times Magazine. Steve received his undergrad degree from Wesleyan University. He teaches non-fiction to fellows in the Nieman Fellowship program based in Cambridge, Mass and served as adjunct professor in creative writing at Boston College until resigning to protest the selection of Condoleezza Rice as the school’s 2006 commencement speaker. A regular correspondent on NPR’s Here & Now and on WGBH, both based in Boston, Steve co-hosts Dear Sugar Radio with Cheryl Strayed. He lives outside Boston with his wife and three children.