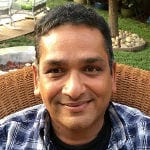 
Srini Koushik is the chief technology officer for Magellan Health. In this role, he works with and leads a team of talented professionals delivering innovative technology and data-enhanced products and services that improve patient outcomes and care for people who need it the most.
Koushik was elected to the IBM Academy of Technology, and was named an IBM Distinguished Engineer in 1996 and owns two patents in the field of software engineering. He was named an Elite 8 CIO by Insurance and Technology (2002), a Top 25 CTO by Infoworld (2004), a Top 10 All-Star in the financial services industry by TechDecisions (2007), and a Computerworld Premier 100 Technology Leader (2014).
He is an Open Group Distinguished Certified Architect, has published several articles, as well as Patterns for E-Business, a book he co-authored in 2001. He has published e-books on digital business, agile IT and innovation. He is also a frequently invited speaker at several industry conferences.