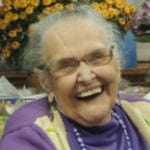 
Mechi Garza is the modern day founder of Kolaimni. She was adopted and raised by a family in West Virginia. She claims ancestry from both European and Native Indian bloodlines; however, it wasn't until she was older that she discovered she was half Native Indian. She received the knowledge of Kolaimni from an ascended master named Lothar and started teaching it in 1980. She is now 92 and lives in West Virginia where she is still active in spreading this very powerful yet gentle technique.