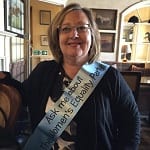 
Viviane has taken on the role of Leader of the Branch of The Women’s Equality Party and looks after event coordination and social media. She recently retired from spending 35 years in sales roles in London and moved to Harrogate in May 2014. She has never been in politics before but has a good understanding of “making things happen” and a “can do” approach. She has spent her whole life feeling very strongly that respect and equality in every aspect of life is of utmost importance. Viviane has two sisters, two daughters a niece and grandniece and numerous friends and is keen that we eventually have a more equal world for everyone!