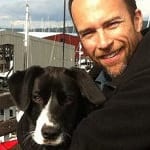 
Tom Arnold left Microsoft to start PetHub.com in early 2010. “I wanted to combine my passion for 20 years of software development with my love of animals and know that I’m making a difference in my lifetime,” he said when asked why he left the software giant. After his cat went missing in 2009 (re-united two days later), Tom learned that once an animal goes missing, less than 2% of cats and 18% of dogs ever get back to their families (source: ASPCA). In just two years, PetHub.com had returned over 400 companion animals with 96.8% of them home in under 24-hours, and 35% home in under 4-hours. “Many pet owners didn’t know their pets were missing yet when they received PetHub’s phone call or ‘Found Pet’ alert. Now I know I’m making a difference in animals’ and families’ lives.” Tom lives in Seattle, Washington, with his 5-year old rescue dog (“Ullr”) and his two cats (“Taz” and “Houdini”).