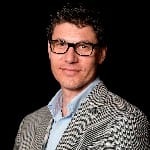 
Devon Akmon is the director of the Arab American National Museum (AANM). Under his aegis, the AANM was named one of just 160 Affiliates of the Smithsonian Institution and achieved accreditation from the American Alliance of Museums, a seal of approval earned by just 6% of America’s cultural institutions. As director, Akmon has established new relationships with individuals and organizations that have resulted in the expansion of the museum’s mission and programming throughout the nation. Most recently, Akmon has overseen the physical expansion of the museum with the creation of the Annex, a new community arts space immediately adjacent to the museum.
In addition to leading the AANM, Akmon is a board member of CultureSource, the Detroit Symphony Orchestra, and The CivCity Initiative. Additionally, he serves on advisory councils for the Detroit Institute of Arts, Smithsonian Affiliations, and the Khayrallah Center for Lebanese Diaspora Studies at North Carolina State University.