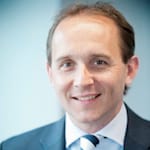 
Tom holds a Master’s Degree in Chemistry from the Utrecht University in the Netherlands and worked at DSM from 1996 till 2002. At DSM he held commercial positions, primarily in DSM’s fine chemicals and life sciences business in the USA and the Netherlands. In 2002, he joined Avantium as VP of Business Development and became Chief Executive Officer of Avantium in 2005. At Avantium he led the company through the transition to become a focused chemical and cleantech company by divesting its pharmaceutical business and by the development of the YXY technology.