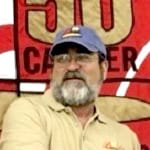 
Randy Powell is Owner and Operator of Thunder Ammo & Arms in Hominy Oklahoma, a family business that Randy started as a hobby in 2006 to pursue competing in the FCSA 50 BMG matches. Randy attended his first FCSA match in the Fall of 2008 and was hooked. In 2010, Randy became Match Director of the Spring and Fall regional matches in Raton, NM. He is in his third term as an FCSA Board Member and will serve as its next President. Randy’s passion for long-range shooting has led him to develop bullets with superior flight characteristics, chambers designed around the profile of his bullets, which has resulted in him and his sons, Andrew and Mason, winning multiple World Championship titles. Randy’s new passion is ELR (extreme long range) shooting, that has led to further development of longer and higher BC bullets, faster twist barrels, and he has also helped other companies develop their products.