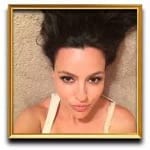 
Celebrity journalist, Allison Kugel, is the author of the just-released book, Journaling Fame: A Memoir of Life Unhinged and on the Record. This dangling raw nerve of a memoir examines her journey with a life-altering anxiety disorder against the backdrop of a career in celebrity journalism. For a decade, Allison was entrenched in the culture of celebrity as an entertainment, pop culture and political journalist whose work was quoted and re-printed by hundreds of media outlets, worldwide. She is currently co-founder of the Upitch app. Kugel is a philanthropist for various charities, including Project Night Night. Journaling Fame is her first book, and through its message, she hopes to be an advocate for people living with anxiety disorders. She and her son live in Florida and New York.