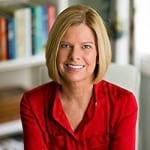 
Mary Simses grew up in Darien, Connecticut and began writing stories at the age of seven. After college, where she majored in journalism, she worked in magazine publishing for a few years and then decided to go back to school to become a lawyer. While working as a corporate attorney, Mary enrolled in an evening fiction writing class at a university in Connecticut and began writing short stories “on the side.” Several of her stories were published in literary magazines. Mary finally took the advice of a friend and decided to try writing a novel. That manuscript ultimately became The Irresistible Blueberry Bakeshop & Café, which was published in 2013 and was adapted for a movie (called The Irresistible Blueberry Farm) for the Hallmark Movies & Mysteries Channel in 2016. The Rules of Love & Grammar is her second novel.