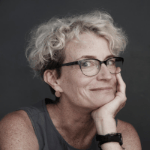 
Author and activist Ashton Applewhite is the author of This Chair Rocks: A Manifesto Against Ageism. In 2016, she joined PBS site Next Avenue’s annual list of 50 Influencers in Aging as their Influencer of the Year. She has been recognized by the New York Times, National Public Radio, and the American Society on Aging as an expert on ageism. Ashton blogs at This Chair Rocks and is the voice of Yo, Is This Ageist? She has written for Harper’s, Playboy, the New York Times, and many other publications, and speaks widely, at venues that have ranged from universities and community centers to the TED stage and the United Nations. Ageism is emerging as a pressing human rights and social justice issue, and Ashton has become a leading spokesperson for a movement to mobilize against it.