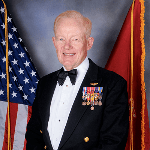 
Captain Charlie Plumb graduated from the Naval Academy in Annapolis in 1964. He earned his Navy Wings becoming a U.S. Naval Aviator. He was sent to the Aircraft Carrier Kitty Hawk where he flew his F-4 Phantom for 74 combat missions over North Vietnam with over 100 carrier landings. On his 75th mission, five days before his tour ended, Plumb was shot down over Hanoi, taken prisoner, starved, tortured and survived the next 2,103 days as a POW until his release on Feb. 18, 1973.
During his captivity, Plumb distinguished himself as an expert in underground communications and served for two years as the Camp Chaplain. He draws parallels between his POW experience and the challenges of everyday life through a straightforward and humorous approach to motivate listeners. His insights on how to cope with difficulties and opportunities have a positive impact on those who hear his message.
Plumb has been awarded the Silver Star, Legion of Merit, Bronze Star, 2 Purple Hearts and the POW Medal.