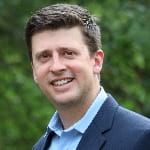 
Dan Heath is a Senior Fellow at Duke University’s CASE center, which supports social entrepreneurs. He is the co-author, along with his brother Chip, of four New York Times bestsellers: Decisive, Switch, Made to Stick, and their latest book, The Power of Moments. Amazon.com’s editors named Switch one of the Best Nonfiction Books of the Year, and Made to Stick was named the Best Business Book of the Year. Their books have sold over two million copies worldwide and have been translated into 33 languages. Dan lives in Durham, North Carolina.