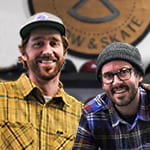 
Born in Winnipeg, MB and moved to Calgary in 1990, Jordan began snowboarding at age 10 and skateboarding a couple years later. He moved around Europe and North America often as a child with his family before returning to Calgary for good in 2000. This is when his enjoyment for snowboarding and skateboarding became his passion. Jordan worked at Boarderline Snow & Skate shop and Alpenland Ski & Board in Lethbridge while attending University. After University he and Brock joined forces on the Mission Snow & Skate team and began their plan for Youth Brigade. Calgary born and raise, Brock spent the majority of his childhood burning out snowboard and skateboard videos in his VCR before going out to try and mimic his favourite riders. Brock worked and managed a number of popular board retail businesses in Calgary in his late teen’s and through his University years; namely, The Ski Cellar, Mission Snow & Skate and Chikko Snow & Skate.