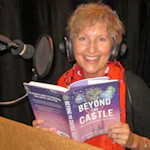 
Jody Jean Dreyer was a member of Disney’s senior corporate staff. She visited there in 1971 soon after it opened. That was the beginning of a 30-year career with Disneyland. She led worldwide synergy, headed Disney’s global outreach initiatives, and held various marketing positions in both the theme park and motion picture units. She met her husband, John, former head of Disney’s Corporate Communications, at a Disney company Christmas party. They have been married twenty-five years and live in South Carolina. Her book, “Beyond the Castle: A Guide to Discovering your Happily Ever After” was released in September.