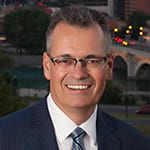 
Oliver is the founder and owner of Sonic Breakthrough Coaching. While he can often be seen wearing a suit and tie, people close to him know that he’s really somewhat of a free spirit who feels most at home in nature, and have frequently referred to him as a “Hippie in a Business Suit.” He spent over 25 years in leadership and management roles, sharpening his business skills with some of Canada’s largest corporations including Energizer Canada, Calgary Co-op, Shoppers Drug Mart and Canadian Tire. He’s also the former Vice-President of Calgary’s Big Rock Brewery. He has worked with a variety of well-known clients, including TransCanada Pipelines, an NHL Hockey Team, as well as executives and business owners in dozens of industries. He is also a chair for MacKay CEO Forums, where he accelerates CEO performance through peer learning, additionally he is the co-founder of “100 Men Who Give A Damn”, a Calgary organization of community-minded men who raise money for local charities.