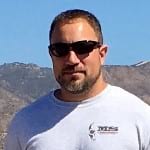 Mr. Vitalbo is the president of nVision Technology Inc. and nVisti, LLC. He began his career at Lockheed Martin where he was one of the principal engineers on various infrared countermeasures and optical communication programs. Later, he became the technical director and chief engineer for all Precision Engagement Technology programs.

After Lockheed, he started nVision and nVisti and partnered with Applied Ballistics. He has acted as the chief engineer on many programs and projects such as the STORM SLX-E, RAPTAR-S, Kestrel 5700 w/ AB, and the KILO2400ABS. In addition, he has developed other software and electronic systems that are used for device comms, digital imaging, ballistics, and optical wind sensing. His areas of expertise are in EO/IR systems and sensors and comms. He has a special focus in the atmospheric propagation of lasers and integration of fire control systems.