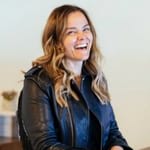 
Susan Petersen is the founder and CEO of Freshly Picked. After becoming frustrated by the lack of well-designed baby shoes, Susan designed baby moccasins and put them on her blog in 2009. From there the company took off, with the rich and famous (or at least their kids) wearing the moccasins and Susan and her moccasins being featured on ABC's Shark Tank. Susan lives and plays at the base of the Utah mountains, with her drone-pilot husband and her two adorable children.
Freshly Picked is a leading baby lifestyle company, with over 6,000 percent revenue growth over the past three years. In 2015, Freshly Picked became the first woman-owned company to be named the number one fastest growing company in Utah Valley. The company was also recognized as having the highest revenue growth percentage to date for the honor. Leading in social engagement and community, Freshly Picked’s million social media followers love celebrating the shared experiences of parenthood with the brand.