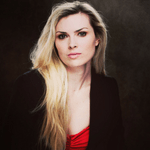 
Heidi-Marie Ferren is an actress, vocalist, and writer and served our service members as Miss USO, performing and speaking across the globe for 4 years. She has performed and lectured in over 700 venues including performances at CitiField, Nassau Coliseum, Madison Square Garden and Dick Clark’s ‘New Year’s Rockin’ Eve’ Nivea Stage in Times Square. As a country, jazz and gospel recording artist, Heidi’s credits include performances with Patti LaBelle, Lee Greenwood and Tony Orlando. Most recently Heidi has had a recurring role on ABC’s hit comedy, ‘American Housewife’ starring Katy Mixon and the lead female role of Sophie in JKic’s award winning short film, The Talk, which is currently playing at festivals worldwide. She has had the honor of working with the incredible Gary Marshall in one of his last films and working alongside one of her mentors, Ted Danson, playing Wonder Woman on HBO’s hit T.V. show “Bored to Death”. Find out more at http://heidimarieferren.net