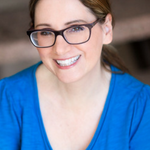 Meli Alexander was born in Hartford, CT. An accomplished chef, she had aspirations of becoming a registered dietitian and food sociologist. However, her focus is being a full time professional actor and producer. Meli has helped produce (and has acted in) projects such as “Who Killed the Bible Salesman?” and “Blueprint”.Meli’s first national commercial for 1-800-Flowers features her in two scenes. She has also been featured in "Dog with a Blog" as a Christmas singer and "Alien Encounters: 3" as a Brid-Mom! Her first principal role was playing a chef in a Toyota tie-in for “Quantico: The Recruits”.You can see Meli in as a baker, etc. in two different segments of “Ghost Story Club” as part of “Rachel Dratch’s Late Night Snack”. You can also see her featured on a Season 3 episode of “Bizaardvark” as an elusive teacher! For more info, please check out www.melialexander.com.