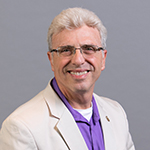 
Gino Colombara has proudly served as executive director of the Southeastern Virginia Chapter of the Alzheimer’s Association for the past 23 years. His involvement with the Association is a direct result of being a caregiver for his father who had Alzheimer’s disease. His service has helped the chapter grow while raising awareness about Alzheimer’s disease throughout the community. The honorary recipient of the Virginia Beach Human Rights Commission 2001 Human Rights Award for support of human rights programs in the community, Gino is proud to serve families who are navigating through the daily challenges of Alzheimer’s while continuing to spread a message of hope for a future without Alzheimer’s. Gino holds a bachelor’s in journalism from Duquesne University in Pittsburgh and a masters in human resource training and management from Boston University. Gino served for eight years in Italy as a U.S. Navy broadcast journalist.