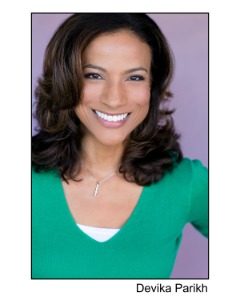 With over 20 years in show business, Devika Parikh has an established acting career working in: TV, film, commercials and voice-overs for TV, radio, animation, film and video games. She recently guest starred on the new Shonda Rhimes hit show ‘For the People,’ airing this May (2019). She also guest starred on a new Netflix dramedy called ‘No Good Nick'. Last year, she appeared as newscaster Morgan in Warner Bros. blockbuster feature film ‘Aquaman.’ Devika has recurred on TV shows, including: Bizaardvark, 24, Resurrection Blvd, Three Rivers, That’s So Raven and the iconic The West Wing. A few of Devika’s other TV credits include: Shameless, The First Family, Prime Suspect, Everybody Hates Chris and Girlfriends. Devika has appeared in numerous commercials over the years including a Nike/Footlocker ad starring Kyrie Irving of the Cleveland Cavaliers. Devika’s film credits include: SWAT, How To Be a Player, Something to Sing About, Supercross, and The Little Richard Movie.