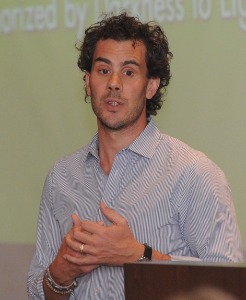 Joshua Alcorn is the Chief Operating Officer at the Beau Biden Foundation for the Protection of Children. Previously, he was a senior advisor to the Draft Biden SuperPAC, and a senior advisor to Beau Biden, 44th the Attorney General of the State of Delaware. Prior to joining the political operation of General Biden, Josh spent five years working for Senator Majority Leader Harry Reid – rising to be Leader Reid’s Finance Director and a trusted political aide. Before joining Leader Reid, Josh served on the Presidential campaign of then-Senator Joseph Biden. In his role as Chief Operating Officer at the Beau Biden Foundation, Josh oversees all aspects of the Foundation’s fundraising, partnerships and program expansion. Josh helped establish the Foundation in June 2015 as an operating non-profit to continue Beau Biden’s commitment to protecting children and confronting abuse. The Foundation believes that no child should be threatened by a predator – either an adult or a peer and that child abuse can be prevented through effectively educating adults and children, developing the next generation of child welfare professionals and strengthening child protection laws around the country. As a political aide to General Biden and Leader Reid, Josh oversaw fundraising operations that raised tens of millions of dollars in federal and non-federal money. He has organized political fundraisers of all sizes – from small breakfasts in Washington, DC to large receptions at both the 2008 and 2012 Democratic National Conventions. Additionally, Josh organized what may be the largest political fundraisers in the history of both Nevada (a 2009 fundraiser for Senator Reid’s reelection campaign featuring President Barak Obama, The Killers and Sheryl Crow) and Delaware (a 2013 fundraiser for Beau Biden’s reelection at the home of Vice President Joe Biden). After graduating from Villanova (B.A., English) in 2003, Josh taught English and Composition at a private high school in his home state of Delaware. He left Delaware for Washington, DC in 2006 to pursue his Master’s Degree in Political Science at American University (M.A., Political Science, 2009). Josh is still involved with American University, regularly serving as a guest lecturer to the School of Public Affairs’ Campaign Management Institute and their Public Affairs and Advocacy Institute. Josh is an avid reader and long distance runner; on weekends you will either find him with his nose in his Kindle (or more likely, reading a Thomas the Train book to his son) or in the middle of a long run. He lives in Southern Chester County, PA, with his wife, Brianna, their children, Noah and Annalise, and their two Jack Russell Terriers, Meadow and Wilco.