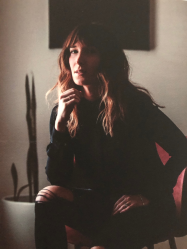 Cameron Dezen Hammon is a writer and musician living in Houston. Her essays, poems, and stories have appeared in Guernica, The Rumpus, Ecotone, The Houston Chronicle, The Butter, NYLON, The Literary Review, Brevity's Nonfiction Blog, Columbia Poetry Review, and elsewhere. Her writing has been anthologized in The Kiss: Intimacies from Writers from W.W. Norton, and My Caesarean: Twenty Mothers on the Experience of Birth by C-Section and After from The Establishment, and honored as notable in The Best American Essays 2017. Her writing also appears in Catapult, Ecotone, the Literary Review, the Houston Chronicle, and NYLON, among other places. She earned an MFA from Seattle Pacific University. Cameron is the host of The Ish podcast, conversations from the liminal spaces of life, and co-founder of the Houston-based literary reading series “The Slant.” Her first book, This Is My Body: A Memoir of Religious and Romantic Obsession is now available.