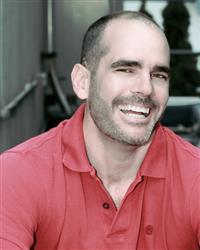 Comedian and writer Eddie Sarfaty has appeared on The Today Show, Comedy Central's Premium Blend, Logo’s Wisecrack, The Joy Behar Show, and is one of the subjects of the documentaries, Laughing Matters and Heartfelt. He’s been featured at Just for Laughs Festival in Montreal, the Toyota Comedy, and the New York Comedy Festival. He’s the author of a collection of humorous autobiographical essays, Mental: Funny in the Head (Kensington Books). His essays have been published in the anthologies When I Knew, I’m Not the Biggest Bitch in This Relationship and Love, Christopher Street. His writing has been featured in the Huffington Post, as well as Out, Advocate, Metrosource, The Gay & Lesbian Review Worldwide, and LA Confidential magazines. In addition to offering stand-up comedy workshops In New York City and at theaters around the country, Eddie has taught stand-up at The Theatre Lab in Washington, DC, and courses in improv and comedy writing at New York University. www.keeplaughing.com.