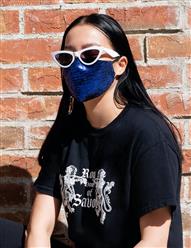 Yi Zhou was born in China, raised in Rome, Italy, and studied in Paris and London, earning degrees in political science and economics. She is a polyglot artist whose video works have been shown at Shanghai Biennale, Venice Biennale, Sundance Film Festival and Cannes Film Festival. Relocating to China in 2011, she founded her personal brand company YiZhouStudio in Shanghai and Hong Kong and in 2018 in LA. She has garnered international attention as an artist and influencer and endorses brands globally including Levi’s, DFS, Conrad Hotel, Iceberg, Persol, Clarins and Shiseido. She has been featured in The LA Times, Daily Front Row, Forbes Magazine, WWD, Vogue Magazine, Vogue China, Vogue Italy, The New York Times and The Hollywood Reporter. She is currently developing her first feature film, Stars and Scars, as director. Being Asian-American in Hollywood presents its own challenges. Directing a feature sci-fi film around a girl with a disability? “Bring it on,” says Yi Zhou.