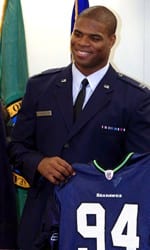 Bryce Fisher is an example of what legends are made of. He graduated from the Air Force Academy in 1999, and was drafted by the Buffalo Bills, in the 7th round the same year. Fisher delayed his NFL career for two years while he served a two year term in the Air National Guard. Each Summer Fisher would join the Bills in training camp, and then report for Active Duty. He played his first full season with the Buffalo Bills in 2001. After each succeeding season, Fisher would join his unit during the off season to complete his reserve obligation, and two week active duty. Fisher was part of the NFL for 9 years, in which he spent 2001 with The Buffalo Bills, 2002-2004 with The St. Louis Rams, 2005-2006 with The Seattle Seahawks, and 2007 with The Tennessee Titans. Fisher was pinned Captain, while in the Air Force, and will be pinned Major in June, 2010. He is currently a member of the 182 Airlift Wing in Peoria, Illinois. Fisher retired from The NFL in 2009, and is now attending graduate school at The University of Chicago, where he is pursuing his MBA. He has the undying support of his family, his wife and three children, his friends, and his teammates.