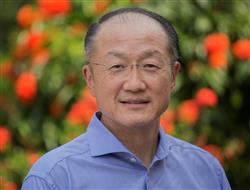 Jim Yong Kim, M.D., PhD, is Vice Chairman and Partner at Global Infrastructure Partners, a fund that invests in infrastructure projects across several sectors around the world. From 2012-2019, he served as the 12th President of the World Bank Group, leading the Bank to establish two goals to guide its work: to end extreme poverty by 2030; and to boost shared prosperity, focusing on the bottom 40% of the population in developing countries. During his tenure, the Bank supported country development priorities at levels never seen outside of a financial crisis. Born in South Korea to parents who had fled the violence of the Korean War and raised in Iowa, his career has revolved around health, education and improving the lives of the poorest and most vulnerable. He earned his B.A. from Brown University and M.D. and PhD in medical anthropology from Harvard University, where Kim co-founded Partners In Health, a non-profit medical organization that provides healthcare to poor communities on four continents. Previously, Kim held the senior global health positions at the World Health Organization’s HIV/AIDS department, Harvard Medical School, Brigham and Women’s Hospital, and Harvard School of Public Health. In 2009, he was named the 17th President of Dartmouth College. He received a MacArthur “Genius” Fellowship, was recognized as one of America’s “25 Best Leaders” by U.S. News & World Report, and was named one of TIME magazine’s “100 Most Influential People in the World.”