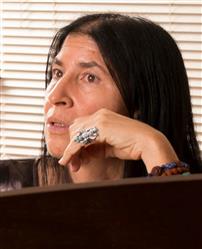 A NY Times Critics' Pick and Emmy nominee, composer/producer/arranger Ruth Mendelson has been writing award-winning scores for documentaries, HBO, National Geographic, Discovery Channel, Disney, Animal Planet, The Learning Channel, A&E, PBS, CBS, and NBC, as well as creating innovative multi-media "surround-scapes" for over 25 years. Ruth was the first woman in the history of Berklee College of Music to teach in the Film Scoring Department, where she designs and teaches master classes in documentary and dramatic scoring. Ruth is currently producing a series of audiobooks for Dr. Jane Goodall (first release: My Life with The Chimpanzees, Hatchett Press) and composed the soundtrack for Dr. Goodall’s award-winning podcast series, Hopecast. Her novel, The Water Tree Way, is quickly becoming a favorite for children of all ages around the world. Her deepest commitment is to be of service and assist in bringing love, compassion, and positive change to society creative projects and programs. An active studio musician, Ruth Mendelson has been featured playing a number of instruments in a wide variety of genres with artists in LA, New York, Boston, Europe and India. She has also served as location sound recordist for the U.S. and international documentaries, most recently recording location sound on the high plains of Mongolia for the documentary film series "Mongolian Chronicles."