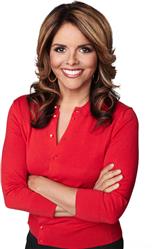 Jane Velez-Mitchell is the founder and managing editor of UnChainedTV, a free, streaming television network available for download as an app on iPhone, Android phone, and via Roku, Amazon Fire Stick, Apple TV device and on LG and Samsung Smart TVs. It's also viewable at unchainedtv the network hub. UnChainedTV offers hundreds of free documentaries, cooking shows, news updates, talk shows and music videos, all with a focus on a compassionate plant-based lifestyle to combat the climate crisis, improve human health, reduce world hunger and animal suffering. She has won four Genesis Awards/commendations from the Humane Society of the United States for her reporting on animal issues. VegNews named Velez-Mitchell Media Maven of the Year in 2010. In 2013, Mercy for Animals awarded her their Compassionate Leadership Award. In 2014, she was honored for fighting animal abuse by the Animal Legal Defense Fund. In 2015, she received the Nanci Alexander Award at PETA's 35th anniversary. For six years she hosted her own show on HLN/CNN Headline News. Previously, Velez-Mitchell reported for the nationally syndicated Warner Brothers/Telepictures show Celebrity Justice. Previously, Velez-Mitchell was a news anchor/reporter at KCAL-TV in Los Angeles and WCBS-TV in New York. She is the winner of a Los Angeles Emmy and a New York Emmy for her reporting. Velez-Mitchell is a graduate of New York University and began her career with reporting stints in Ft Myers, Florida.