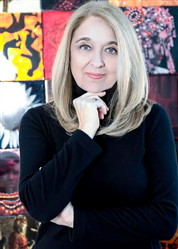 In Ann's words: I have wanted to be a writer for as long as I remember. My favorite books when I was a kid were Little Women and Nancy Drew. Later, I loved Marjorie Morningstar, Les Miserables and Doctor Zhivago, obviously choosing books by size! A Rhode Island native, I was born in West Warwick and spent high school working as a Marsha Jordan Girl, modeling for the Jordan Marsh department store at the Warwick Mall. I majored in English at the University of Rhode Island, and that's where I fell in love with Shakespeare, Willa Cather, and F. Scott Fitzgerald. When I was in seventh grade, I read a book called How To Become An Airline Stewardess that fueled my desire to see the world. And that's just what I did when I graduated from URI--I went to work for TWA as a flight attendant. Back then, I thought you needed adventures in order to be a writer. Of course, I know now that all you need, as Eudora Welty said, is to sit on your own front porch. But I did see a lot of the world with TWA, moved from Boston to St. Louis and finally to NYC, a place I'd dreamed of living... I wrote my first novel, Somewhere Off the Coast of Maine, on international flights and on the Train to the Plane, which was the subway out to JFK. It was published in 1987. Since then, I've published in The New York Times, The Paris Review, O, Bon Appetit, Tin House, The Atlantic Monthly, Real Simple, and other wonderful places; I've won two Pushcart Prizes, Best American Food Writing Awards and many others.