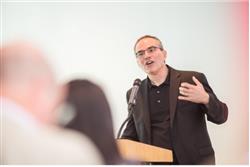 Mark Levy is the founder of Levy Innovation LLC, a positioning and strategy firm that helps organizations and thought leaders differentiate by using, what he calls, “a Big Sexy Idea.” Mark has consulted to some of the world’s most prominent companies and individuals, including CEOS of major brands; the former head of Strategy at the Harvard Business School; and Simon Sinek of “Start with Why” fame. Mark has also consulted to a TV special on the History Channel, as well as to the iconic TV series, “Mystery Science Theater 3000.” In 2018, Mark was elected to the Consulting Hall of Fame. The hall’s founder called Mark’s messaging and positioning work “unparalleled.” Mark is also a speaker. He’s given talks to Adobe, American Express, and Google, among others. Mark has written for the New York Times, and has written or co-created five books, including “Accidental Genius: Using Writing to Generate Your Best Ideas, Insight, and Content,” which has been published in eleven languages. He has taught entrepreneurial strategy and persuasive business writing at Rutgers University. Besides his positioning work, Mark creates magic tricks and shows. One of the shows he co-created, “Chamber Magic,” has run for over two decades, and appears on TripAdvisor as New York City’s highest-rated live show, ranked even higher than “Hamilton.”