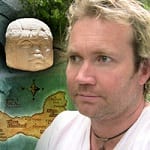 Hugh Newman is an earth mysteries and megalithic science researcher. He organizes the Megalithomania Conferences, tours and meet-ups in Glastonbury, UK, North America, Peru, Egypt, Mexico and South Africa. His most recent book, Earth Grids has been published by Wooden Books. Hugh has spoken at conferences in the UK, Malta, France, Peru, Bosnia, and North America. He has appeared on BBC TV, Sky Channel 200 and on History Channel’s “Ancient Aliens” Series 3 and several episodes on series 4 in 2012. He is currently writing a book about the Wandlebury complex near Cambridge, UK. www.megalithomania.co.uk/hughnewman.html