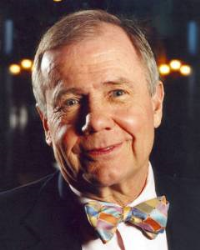 Jim Rogers, a native of Alabama, is an author, financial commentator and successful international investor based in Singapore and Chairman of Beeland Interests, Inc. Frequently featured in The Washington Post, The New York Times, Barrons, Forbes, Wall Street Journal, The Financial Times, and publications dealing with the economy or finance, he has also appeared as a visiting professor at Columbia University.After attending Yale and Oxford University, Jim Rogers cofounded the Quantum Fund, a globalinvestment partnership. He then decided to retire at age 37. Continuing to manage his own portfolio, Jim Rogers kept busy as a professor of finance at the Columbia University Graduate School of Business, and, in 1989 and 1990, as the moderator of WCBSs The Dreyfus Roundtable and FNNs The Profit Motive with Jim Rogers. In 19901992, Jim Rogers fulfilled his lifelong dream: motorcycling 100,000 miles across six continents, which landed him in the Guinness Book of World Records.