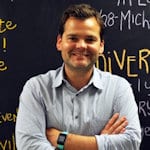 
Blake Squires is a product entrepreneur who has founded several product companies and he has navigated 3 successful exits since 1999. Blake co-founded Everstream, Findaway and Movable. He also founded Hatch that invests in and helps entrepreneurs maximize their ideas. From his love of entrepreneurship and business in general, Blake also coaches several product CEOs. Because that wasn't enough, he's also started three more companies: DoctorsOrders, Stuhr and Stubl. It's no surprise that Blake was awarded “40 Most Influential People Under 40” by Crain’s Magazine and was named as an EY Entrepreneur of the Year finalist in 2010. Blake is a Cleveland-native, and resides in Fairlawn Heights with his wife Michelle and their four children.