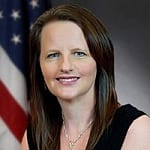 Amy Palmer joined Soldiers’ Angels as the President & CEO in October 2013. Palmer previously worked for Operation Homefront in many roles, most recently as the Chief Development Officer. Palmer had also served Operation Homefront as Chief Operations Officer, Chief Field Operations and Programs Officer. As one of the co-founders of Operation Homefront she worked tirelessly for 11 years to take the organization from a fledgling local effort to one of the most respected military support organizations in the country. Amy volunteers as a guest speaker for various foundations and nonprofit organizations around the country. She often speaks on matters pertaining to board governance and fundraising in addition to the needs of military families in times of war. She has been nominated for numerous awards for her career of service. She was featured on Lifetime Channel’s “Remarkable Women,’ a year-long series celebrating women who have inspired and empowered others to make a difference in their communities and throughout the world, including Michelle Obama, Hillary Clinton, and Sonia Sotomayor. Besides her feature on Lifetime Television, Amy has appeared on many other national television and radio shows to include Good Morning America, CBS Early Show, Fox and Friends, and Rush Limbaugh. Amy Palmer is a disabled Air Force veteran and her husband a retired Air Force officer who is also severely disabled from military service. Amy has a Bachelor’s Degree in Organizational Management, a Certificate in Nonprofit Management from Michigan State University and the Society of Nonprofit Organizations, and is currently working on her Master’s Degree in Philanthropy.