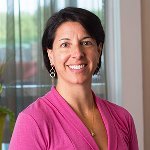 
Amy Alexander comes to College Coach after spending 17 years as an independent counselor. She began her admissions career as an assistant director in the Yale University undergraduate admissions office, where she was responsible for applications from a variety of regions, served as a liaison for the swim and lacrosse teams, and coordinated on-campus orientation programs and housing placement. During her time as an independent counselor, she was a member of the National Association of College Admission Counseling and the New Jersey Association of College Admission Counseling. She also volunteered at both the North Star Academy Charter School and St. Benedict’s school in Newark, helping seniors with their college application essays. Amy received her bachelor’s degree in socio and psycho linguistics from Yale, and her master’s degree in human resources/organizational behavior from Golden Gate University.