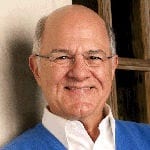 Jim Kouzes is the Dean’s Executive Fellow of Leadership, Leavey School of Business, Santa Clara University and the coauthor with Barry Posner of the internationally award-winning and best-selling book, "The Leadership Challenge," with over 2 million copies sold. Jim has co-authored over thirty other books, including "The Truth About Leadership, Credibility, Encouraging the Heart, and A Leader’s Legacy," as well as the "Leadership Practices Inventory" (LPI)—the top-selling off-the-shelf leadership assessment in the world. The Wall Street Journal named Jim one of the ten best executive educators in the U.S., and in 2009 he received the Distinguished Contribution to Workplace Learning and Performance Award from the American Society for Training and Development (ASTD). He was presented the Thought Leader Award by the Instructional Systems Association in 2009. Jim has also been recognized as one of HR Magazine’s Top 20 Most Influential International Thinkers in 2010-2013 and as one of the Top 100 Thought Leaders in Trustworthy Business Behavior by Trust Across America in 2010-2015.