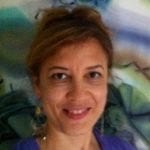 
Leslie Hollis began her investigation of alternative and holistic healing methods in 1982 after a serious, dance related injury. When her grandmother was diagnosed with breast cancer, she began a focused study of holistic healing methods in an effort to find anything that could help her grandmother through the healing process. In the years that followed Leslie continued her study of "Light work" receiving a Reiki Master certification in 2006. In 2012 she took her first Kolaimni class with Marie-Hélène Tourenne and became a Kokaimni Instructor in 2013 under the guidance of Mechi Garza. Leslie is also a student practitioner of Healing Touch and holds an MFA in Studio Arts specializing in metal smithing.