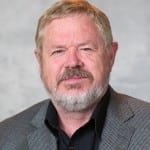 
Starting in the 1990s, Bill began pioneering white-men-only diversity learning labs after noticing white male executives were not actively engaged in their organization’s diversity & inclusion efforts.
Bill’s innovative work led to co-founding White Men As Full Diversity Partners, and the development of WMFDP’s provocative approach to engaging white male business leaders in inclusion efforts. For over 35 years, he has served as a leadership development consultant, coach and facilitator to countless organizations and executives around the globe on issues of team effectiveness, cultural competency, and inclusion. He is a sought after speaker, writer, and thought-leader at the intersection of diversity & inclusion and leadership. In 2015, Bill presented The Kurt Hahn Address, an honor awarded by Association for Experiential Education to the person who has contributed to the development and advancement of experiential education with tenacity and conviction.