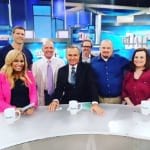 
Rocky Rosen, The Cigarette Whisperer, describes himself as having been a die hard, got to quit, can’t quit, must quit, won’t quit, DESPERATE to quit, tried everything there is to quit, never going to quit smoker... who has helped many, MANY people to stop smoking over the years. With his approach, there are no tricks, gimmicks, drugs, hypnosis, nicotine replacements, or B.S.! Rocky was smoking up to 2-packs a day for over 20 years, and had tried numerous ways to stop smoking, including: nicotine replacement therapy, acupuncture, hypnosis, injections, aversion therapy, and support groups. Although he was able to get some time off of cigarettes (once even up to 2 years), eventually the urge to smoke would reappear, and Rocky would find that he was right back to smoking as much as ever. The technique he teaches his clients is how to use the urge to smoke as the way to get free instead of always trying to fight, ignore, and deny those urges which still creep up after we stop.