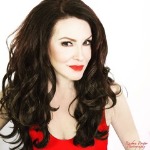 
Born in Waukegan, Illinois, Gretchen doesn't call any one place home. She has moved around, Illinois to Germany. While working doing bookings for a radio station in Phoenix, she was set up on a blind date with future husband, Danny Bonaduce, who was working at the local radio station. She managed Danny’s career for 16 years and is a devoted mother to their two children, Countess Isabella (age 22) and Count Dante (age 16). She was Executive Producer of 2 seasons of VH-1’s “Breaking Bonaduce” which documented the chaotic life of her family. The series showed how her positivity and strength carried her and her children through a difficult marriage. She once shot a pilot for ABC's Soap Network titled Soap Talk which got picked up by the channel. Gretchen was also an executive producer and creator of VH-1’s I Know My Kid's A Star and she won on Fox’s Gimme My Own Reality Show. Gretchen has appeared on many other television shows, from Phil Donahue to OPRAH, and her book debuts in 2018.