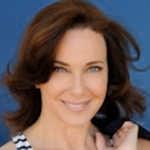 
Clarissa Burt is an entrepreneur, television/video producer, public speaker, author, writer, award-winning actress, and emcee. At 18 she was a top model with the Wilhelmina Modeling Agency in Manhattan. Soon after she moved to Milan and quickly began appearing on over a hundred magazine covers such as Harper’s Bazaar, Vogue, and Cosmopolitan as well as on most of the major runway shows in Milan, Rom e, Paris, New York, and Japan. This led to work for cosmetic houses Revlon, Dior, and Carita, Helena Rubenstein and her selection as the worldwide “Face” of Orlane Cosmetics. Currently, Clarissa has launched her personal brand on QVC in Europe where she brings her sense of elegance and style to “Made in Italy” products. Starting with a women’s loungewear line, from her very first show, Clarissa boasts sold-out numbers. She is also the creator of The Envelopment Network, connecting women globally to create intelligent content, share information, and exchange ideas.