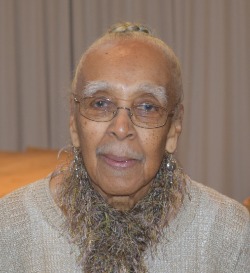 An artist, a scientist, wife, mother, friend, grandmother, breast cancer survivor, avid learner, social activist, Elmer Lucille Hammonds Allen is a wonderful example of a life well lived.
A native of Louisville, Kentucky, she received her BS in General Education (Chemistry & Mathematics) in 1953 and her Masters of Arts in Creative Arts in 2002.
Hired in 1966, she was the first African American chemist at Brown-Forman. She retired in 1997.
Mother of three, she is a community leader, volunteer, and was the subject of the play, “She Moves Like the Wind” by Nancy Gall-Clayton.
Her work in fiber and ceramic art has been exhibited in several places. She is a member of Alpha Kappa Alpha Sorority, Inc.
Mrs. Allen has received numerous awards, most recently receiving the Gold Standard Award for Optimal Agin-Outstanding Individual Award from the University of Louisville’s Institute for Sustainable Health and Optimal Aging.